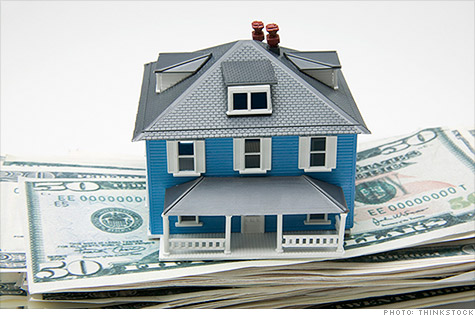 The clock is ticking on a tax break that saves struggling homeowners from paying thousands of dollars to the IRS.

NEW YORK (CNNMoney) — The clock is ticking on a tax break that saves struggling homeowners from paying thousands of dollars to the IRS.

If the Mortgage Forgiveness Debt Relief Act of 2007 does not get extended by Congress by the end of the year, homeowners will have to start paying income taxes on the portion of their mortgage that is forgiven in a foreclosure, short sale or principal reduction.

So if you owe $150,000 on your home and it sells for $100,000 in a foreclosure auction, the IRS could tax you on the remaining $50,000. For someone in the 25% tax bracket, that would mean paying $12,500 in taxes on the foreclosure. Similar taxes would apply for forgiven amounts in short sales and principal reductions.

“People trying to do short sales are freaked out about it,” said Elizabeth Weintraub, a real estate agent in Sacramento, Calif. “They’re telling me they’ll do whatever it takes to close by the end of the year.”

Related: Where homes are affordable

Should the tax break expire, a large number of mortgage borrowers could be affected. More than 50,000 homeowners go through foreclosure each month. Meanwhile, the number of short sales has tripled over the past three years to a rate of about half a million a year. And, under the terms of the $25 billion foreclosure abuse settlement, roughly one million borrowers may have their mortgage debt lowered through principal reductions over the next couple of years.

“If there ever was a no-brainer in housing policy, this would be it,” said Jaret Seiberg, a policy analyst for Guggenheim Securities.

Yet, Seiberg is skeptical the exemption will get extended. Now that the election is over, he thinks Congress will be heading into a “lame duck” session, with very little legislation moving forward through the end of the year.

In addition, the cost of the exemption could make it a point of contention, he said. The office of Sen. Max Baucus, who heads the finance committee, estimated the cost of a one-year extension at $1.3 billion.

Others disagree. Tom Kolpien, the press secretary for Rep. Tom Reed of New York, said Congress will likely act before the end of the year. (Reed is currently pushing for the extension on the House Ways and Means Committee).

“Both parties, both houses of Congress agree it’s good policy and it needs to get done,” said Jamie Gregory, chief lobbyist for the National Association of Realtors, which supports an extension. “The hold up is the process. I’m confident it will get done. I just don’t know how.”

Even if Congress allowed the exemption to expire, not all borrowers with forgiven mortgage debt will take a tax hit. If the debt is discharged in a bankruptcy, no tax is due. And anyone who is insolvent — meaning they have more debt than assets — at the time the debt was forgiven — would not have to pay the tax.

Also in some states like California, certain borrowers are protected against paying the tax because of the way the state treats foreclosures.